A critical installation such as a gas or steam turbine requires constantly perfectly clean and dry oil for proper lubrication, anywhere in the system, from bearings to the control hydraulics. Yet it often happens that the oil is (extremely) contaminated, even though you replace the standard filters on time. How come?

This has everything to do with the aging or oxidation process of oil. Even in new oil, the aging process is already well underway. The only thing we have to add to this are catalysts; dirt particles such as metals and moisture. The temperature does the rest. The oxidation level rises and there is a chemical reaction in the oil, namely, OXIDATION. This forms a brown, soft deposit (the oxidation product) and is called resin or varnish. Varnish formation not only allows the oil to oxidize even faster, it also forms a deposit on the walls of the tank and it settles in the pipes of the entire system, in pumps, valves and clogs up existing filters. This in turn results in insufficient bearing lubrication, deteriorating temperature housekeeping, poorly functioning pumps and valves, more frequent replacement of the standard filters and perhaps even of the oil. We can say that the oil is losing its lubricating properties and the ability to transport dirt to the filter.

Can this be solved by replacing the oil? Well, no ... In 99% of the cases the oil is not really the problem and can be cleaned using proper filtration like Triple R. Often the varnish residue inside the machine/system is such that replacing the oil is only a very temporary solution. This is because the new oil loosens the dirt that is present everywhere and then transports it to the standard filters. A filter that is not resistant to this type of dirt, clogs, and then needs to be replaced again. The frequency will increase and breakdowns imminent. Keep in mind that the new oil, in case of an oil change, is directly in contact with the residue inside the system, causing the new oil's oxidation process to go even faster. 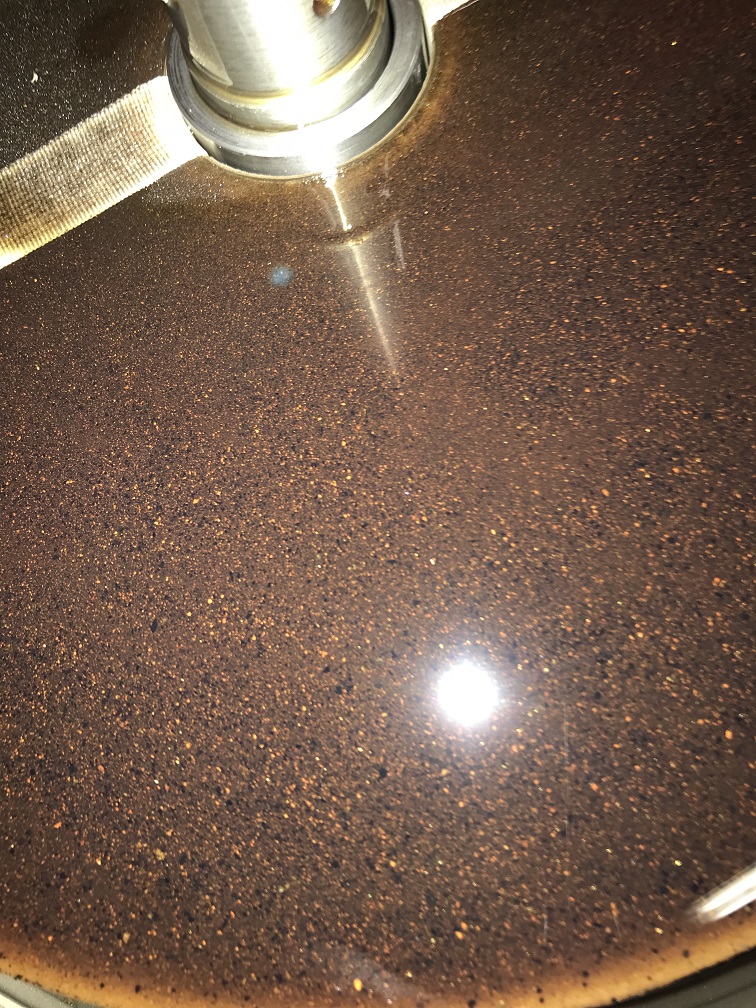 Solid particles cause a lot of damage on critical components, for example, bearings, pumps, valves, gears, seals and cylinders. The biggest damage, in the long run, is caused by particles smaller than 5μ. These particles not only cause damage to (critical) components, the lifetime of the oil is also drastically reduced. These particles act as a catalyst and allow the oil to oxidise many times faster. This oxidation process must be prevented to ensure that the oil retains its chemical properties and can therefore provide good lubrication and cooling. Triple R bypass depth filtration removes solid particles > 0.1μ. This means a substantial reduction of damage over time (= wear) on all components and also significantly prolongs the life of the oil. In this picture we not only see many metal particles, but also the brown resin color (varnish) is clearly visible. The Triple R filter element prevents resin formation by capturing the smallest metal particles, moisture and resin/varnish in solution. 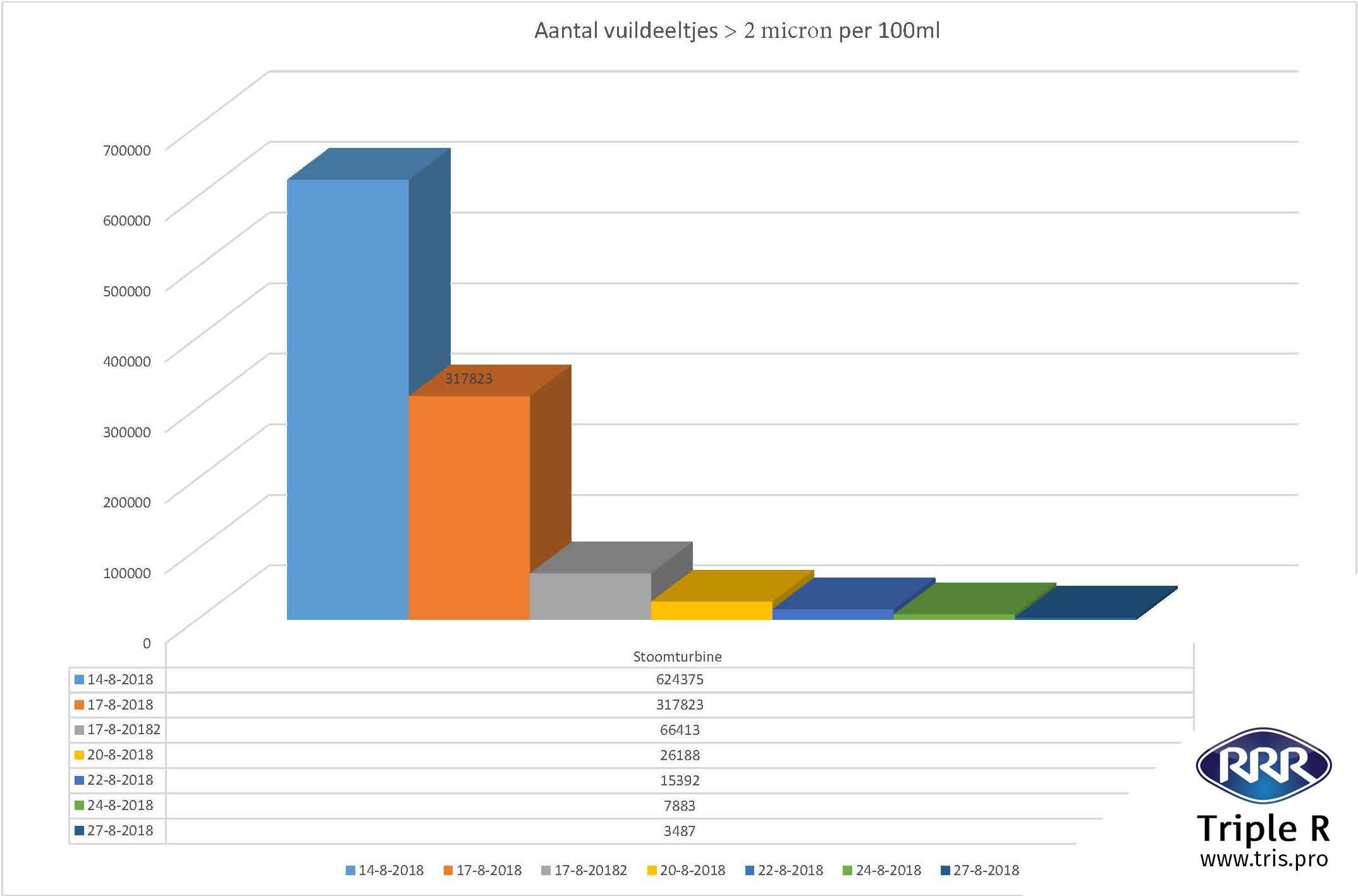 These show the actual particle contamination, counting particles > 2 micron. Drastically lowered within 2 weeks after installing Triple R on this steamturbine. 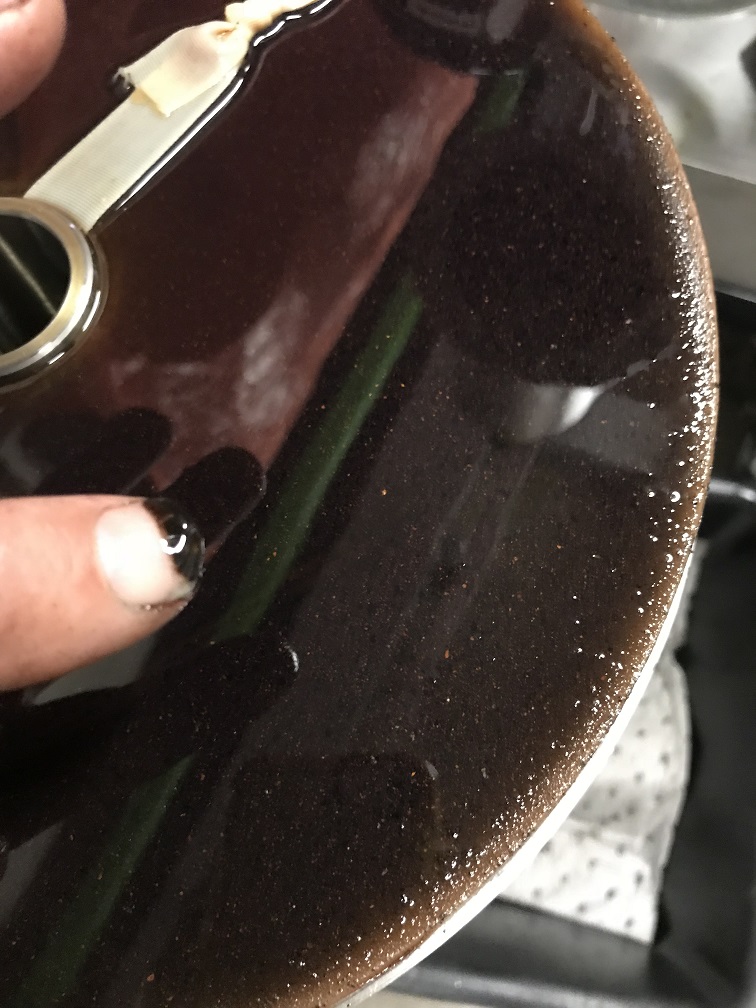 Resins, varnish or sludge, occur as 'soft' contamination. Inside this soft contamination is also dirt, dust and wear particles present. Resin is deposited as a kind of layer on the walls of the tank and in all components. Ultimately, this form of contamination forms the well-known brown deposit in, for example, (servo-) valves, which cause them to start to 'stick' and eventually to switch badly and therefore have to be replaced. Existing filters also often clogged because of this resin formation, which means that they can hardly do their work. Resin formation is found in every machine and the dangers are often overlooked. Very unjustified, since varnish formation is one of the meanest forms of oil contamination and causes a lot of problems. It is very much a "silent killer" when it comes to oil contamination in your machine. With Triple R depth filtration we remove not only dirt, moisture and varnish particles but also varnish that is in solution. See photo for the varnish formation found inside this steam turbine, captured by our filterelements. This residue is inside the entire system. It's formation is actively counteracted by the Triple R filter element after the already formed varnish/resin has been filtered out.

Oxidation level analysis in %. 80% is the absolute maximum and without immediate, proper filtration breakdowns are unavoidable. Within 2 weeks of cleaning the oil and its system with Triple R, we got the oxidation levels down to 15%.